Posted by TennisNews.com on December 10, 2015 in Headline, Tennis News 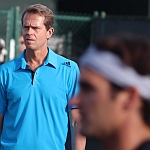 Edberg had spent two years at Federer’s side at Grand Slam tournaments, the ATP World Tour Finals and several other important events.  However the relationship was not destined to last to the Swiss’ eventual retirement, whenever that might be, and Edberg used the ATP World Tour website to announce the parting of the ways.

“Roger and I had a wonderful two years together,” said the Swede. “It became very clear from the start that this was going to be a special partnership, working with the greatest ambassador tennis has ever seen.”

However Edberg, a committed family man with widespread business interests in his native Sweden, had long been aware 2015 would be his last as Federer’s coach. “After an amazing 2014, I decided to continue on for another year, but with a clear understanding that it would be my last year given the time commitment,” he continued.

“Roger still has a lot left to give to the sport of tennis and is capable of winning the big events. Roger and I will remain close friends and I will always feel part of the Federer team. I hope to try and come watch Roger play some tournaments in 2016.”

Under Edberg’s watch, Federer recaptured the attacking game that made him such a stand-out player as a youngster and tactics such as serve and volley, chip and charge and the much debated SABR (Sneak Attack By Roger) figured hugely in his progression to the finals of 2015’s last two majors at Wimbledon and the US Open as well as the more recent Barclays ATP World Tour Finals.

Federer announced on both Facebook and his personal website: “After two very successful years, I would like to thank Stefan Edberg, my childhood idol, for agreeing to join my team. It was a dream come true. Although it was supposed to only be for 2014, Stefan was great and agreed to extend the partnership through this year, which I really appreciated. He taught me so much and his influence on my game will remain.”