Posted by TennisNews.com on December 16, 2015 in Tennis News 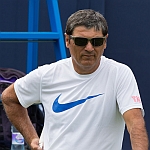 Toni Nadal has been coaching his nephew Rafa Nadal when he was just a little kid. When he began teaching him, it was a poor court, there were no lights, and it had a few potholes.

But the Spaniard learned how to teach the small lefty and eventually, the super fast boy began ripping the ball. Now, in 2015, Rafael Nadal has won 14 Grand Slam events . The coach has been there at all times.

Now 54-years-old, Toni Nadal is learning and reading. He realizes that in order to stay fresh, he needs to know how to improve constantly.

“I have learnt a lot during these few years. Because as a coach, I’ve had a lot of opportunities on the ATP tour,” Toni Nadal told Tennis World. “I’m with one good player on the Tour and I have had the possibility during these years to see the best players. I have seen Novak Djokovic and Roger Federer; how they practice and play – either on the court or on the video. I think I have improved. I have things I haven’t seen, things that before when I was in Manacor [where they live] that I had not seen then. I have gained lot of experience.”

Rafael Nadal is currently ranked No. 5. ‘Rafa’ was unable to win a major this season, but he did improve during the fall and in 2016, Toni believes he could be more mature and an all-around in his game.

“First objective is to play well, play with confidence and be aggressive,” Toni Nadal said. “Then, to improve his service, his forehand and then win tournaments. I think Rafael is on the way. In the last month, I have seen Rafael not too far from where he was when he was no.1 or no. 2. I hope when we play outdoor (events) in the next month, we have the possibility to make very good tournaments.”