Federer To Play In Stuttgart And Ticket Sales Soar

Posted by TennisNews.com on December 16, 2015 in Headline, Tournament News 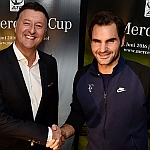 The Roger Federer factor is already having a positive influence on ticket sales for the summer’s Mercedes Cup six months before that fact. The grass-court event will feature the Swiss legend for at least the next two editions, and demand for tickets for the June week at the Weissenhof club is said to be huge.

Tournament organizers also expect to score a hit with 37-year-old Tommy Haas in the field, a boost for German tennis audiences.

Officials say that quarter and semi-final tickets are almost all sold. The possibility of adding temporary stands to the mix is being studied.

The American Bryan brothers have also been signed for the June 4-12 event. The pair will compete next year in Stuttgart not only in double competition at the Mercedes Cup, but also an exhibition on the occasion of the 100th anniversary of Weissenhof tournament contest. The exhibition will be staged on Sunday,  June 5, at the opening of the jubilee celebrations.