Posted by TennisNews.com on January 19, 2016 in Business News 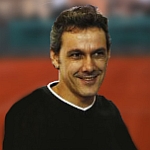 The former player Renzo Furlan has been named the new president at the Tennis Federation of Serbia. The former president Vuk Jeremic just left. Before that, Jeremic was previously the President of the 67th Session of the United Nations General Assembly.

The No. 1 Novak Djokovic is pleased that Furlan had decided to come in, as he has not only playing on the ATP tour, but now 45-year-old also coaches.

“I participated in the process of finding someone who is adequate, who can be as good an expert and responsible enough to take care of the Serbian Tennis Federation from the expert, technical part,” Djokovic said. “We thought, after talking with many people around the tour, that he’s the right person to do the job that he accepted to do.

“I have no other interest in the Tennis Federation of Serbia or with him personally. But to maintain this level of popularity and success in Serbia in the years to come, I’m just trying to contribute as much as I can from my side into the future of Serbian tennis because unfortunately we still don’t have the National Tennis Center, we still don’t have the system in place that actually would support that bright future for our sport.”

“The success that we are having now obviously didn’t have anything to do with any kind of system,” Djokovic said. “So we’re trying l to follow the models of other countries that had tradition and history of success throughout decades, like Australia, for example, that has I think a terrific junior development program, a structure in place that actually supports young players. That was the whole purpose of getting Renzo in, trying to diversify the expertise in the Federation.”