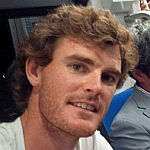 A few years ago, Jamie Murray was almost ready to quit. The British doubles player competed with a number of partners, but he wasn’t going anywhere.

Now, the 29 year old has really turned it around, winning his first Grand Slam doubles title at the 2016 Australian Open. Last year, he and John Peers reached the final at Wimbledon and the US Open, but were unable to get through. He split with Peers at the end of the year and hooked up with the effective Bruno Soares.  The left-handed Murray played nearly perfect in the last two sets to win over Daniel Nestor/Radek Stepanek.

Late at night, Jamie’s younger brother, Andy, came out on court at Rod Laver and cheery loudly. Jamie finally made it.

“This is my bread and butter. For me, the Grand Slam men’s double, that is going to be the pinnacle of my career other than Davis Cup obviously [Great Britain won the Davis Cup final last year]. This is what I’m working towards every day, every time I step on the court. It’s an amazing feeling to have realized that with Bruno. We played a great tournament. Pretty speechless. Really, really happy with our work the last couple of weeks.

Hasn’t always been rosy for me. A lot of ups and downs in my career. Thankfully things have started to really pick up in the last year or so.”

Now, Jamie Murray is currently ranked No. 2 and it’s possible that he can beat out the singles No. 2 Andy Murray, reaching No. 1.  Either way, Jamie Murray is just happy overall.  In 2015 and the start of this season he has improved  greatly. During the past 10 years, he was worked with the coach Louis Cayer, who has been very patient for him.  A lot of other people have also helped him, too.

“Louis the guy that made it happen for me to have success on the doubles court. He really believed that I could do great things. It took me a lot longer to realize it,” Jamie Murray said. “My wife [Alejandra], , she’s the one when I’m winning matches, great, but when I’m losing matches coming home disappointed, she’s the one that’s there, kept believing in me, kept telling me I had talent, I could do great things. She’s my rock. She made me keep believing, keep wanting to do it, get to the top. It’s emotional to talk about that stuff. It was funny to see Andy there at the end. He’d obviously been watching the match in the locker room. I thought he left to go back to the hotel obviously. Maybe he came back when he thought we had a chance.”