Posted by TennisNews.com on March 15, 2016 in Business News, Headline 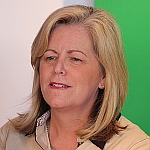 Former WTA CEO Stacey Allaster is back in tennis, having been chosen to lead the pro tennis division for the USTA.

USTA chief Gordon Smith said Allaster had been chosen because others did not have “that background or those qualifications.”

The former CEO was also tournament director of the alternating ATP and WTA event at Toronto. She has also worked as a coach.

Allaster resigned from the tour for personal reasons, officially leaving just before the WTA championships began. She said the time off allowed her to refresh and that she was willing to take this job because travel was limited.

Allaster has been assigned to keep tournaments in the United States, especially the one in Miami. The Masters event, criticized for not upgrading its facilities, is having expansion plans blocked by local residents. The issue is before the courts.

There will also be supervision of the USTA development program’s move to Florida, where a 100-court facility is being built.

The position has been newly created by the organization.