Andy Murray To Bring His New Family to Miami

Posted by TennisNews.com on March 18, 2016 in Tennis News 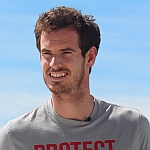 Andy Murray’s newborn daughter Oliva is set for the first of what could likely be many future tennis road trips as the world No. 2 brings his wife and child to the Miami Masters barely a month after the baby was born. “She’s coming to Miami so that will be the first trip my daughter does outside of the UK,” Murray said at Indian Wells, where he is on his own with his team which includes new assistant coach Jamie Delgado.

“Hopefully that goes well. Maybe if that goes really well we’ll be a bit more pumped to travel in the future. We’ll just have to see how it goes in a couple of weeks.”

The Scot – one of four fathers in the ATP top 5 – admits he has been seeking logistical help from colleagues including experienced parent Roger Federer and newcomer new father Novak Djokovic. “I spoke to Roger a little bit in Cincinnati about it, I spoke to Novak a little bit about it … Everyone’s a bit different,” Murray said.

“Kim’s not massively into travelling every week whereas some of the partners on tour like travelling and that works for them. It’s just about trying to find what works for you.”

Murray is competing on the ATP for the first time since the Australian Open, where he lost another final to Djokovic and then rushed home to Britain for what became a birth a week later. The 28-year-old stepped onto a court for the first time a week ago in a Davis Cup win for holder Britain.

“I’ve been sleeping decent, which is important, and I’ll try to get some practice in the next few days to get better used to the conditions. I haven’t hit a ball outdoors for about five or six weeks so it’s quite different.”