Posted by TennisNews.com on March 21, 2016 in Headline, Tennis News 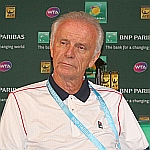 “Earlier today I had the opportunity to speak with Raymond Moore,” said BNP Paribas Open Owner, Larry Ellison. “Ray let me know that he has decided to step down from his roles as CEO and Tournament Director effective immediately. I fully understand his decision.”

“Nearly half a century ago, Billie Jean King began her historic campaign for the equal treatment of women in tennis. What followed is an ongoing, multi-generational, progressive movement to treat women and men in sports equally. Thanks to the leadership of Billie Jean, Martina Navratilova, Venus Williams, Serena Williams and so many other great women athletes, an important measure of success has already been achieved. I’m proud to say that it is now a decade long tradition at our tournament at Indian Wells, and all the major tennis tournaments, to pay equal prize money to both the women and the men.”

“I would like to personally thank all the great women athletes who fought so hard for so many years in the pursuit of equal prize money in professional tennis. And I’d like to congratulate them on their success. All of us here at the BNP Paribas Open promise to continue working with everyone to make tennis a better sport for everybody,” concluded Ellison.