Posted by TennisNews.com on March 21, 2016 in Headline, Tournament News 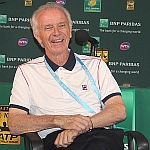 Every year at Indian Wells, the leadership of the tournament host a casual media breakfast on final Sunday with media attendees. Generally, the topic covered is the tournament structural changes so far and what changes one can expect for next year’s event. It is always a casual affair; Simply, what will happen in the next 12 months to make the tournament, which is selected by the players to be the best event on the tour, to be even better next year.

Sunday’s Breakfast With Raymond Moore, tournament director, moved along smoothly as always with 15-20 men and women in attendance, when Moore made a couple off the cuff remarks that have been picked up on social media, and have been misinterpreted and taken on a life of their own. Moore was never ranting. He was always casual and light in his comments – sometimes even joking.

After breakfast, Moore apologized to the WTA and its members and to women in general if he offended.