Posted by TennisNews.com on June 8, 2016 in Business News, Headline 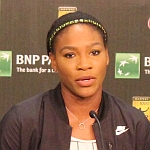 The world’s highest paid female athlete is once again a tennis player, but it’s not Maria Sharapova. Serena Williams is in the top spot, with Forbes estimating the No. 1 had earnings of $28.9 million in the previous year.

Williams and Sharapova are tied in off court income with $20 million, with Williams increasing her haul with Grand Slam title bonuses, exhibitions, and new deals with companies like Chase,  while Sharapova is under suspension pending a drugs hearing and has seen sponsors like Nike, Tag Heurer and Porsche suspend or not renew their deals with her.

Williams also had $8.9 million earned through prize money, while the sidelined Sharapova has $1.9 million.

Most of the spots on the Forbes ranking went, as usual, to tennis players. No. 5 was Agnieszka Radwanska, who had $10.2 million with $5 million off the court, and Caroline Wozniacki No. 6 with a million on the court despite higher off court earnings of $7 million. But Garbine Muguruza would have topped them both if her $2.3 million French Open victory was added to her $7.8 million earnings, of which $3 million were off the court.