Kei Nishikori Pulls Out Of Basel With Injury

Posted by TennisNews.com on October 23, 2015 in Headline, Tournament News 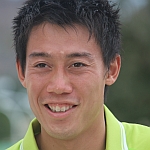 Injured Kei Nishikori has put his World Tour Finals qualifying chances in strife after pulling out of next week’s Swiss Indoors with a shoulder injury.

Tournament officials confirmed that Asia’s top player would not participate on the indoor hardcourt in the hometown of Roger Federer.

Nishikori, losing finalist in 2011 to six-time finalist Federer, stands seventh in the points race for the eight-man year-ender in London from November 15. Two spots in the field have yet to be filled, with the Japanese standing first in the queue.

But he can be passed this weekend if provisional eight-placed David Ferrer were to win the Erste Bank Open in Vienna, dropping from seventh to eighth. Without a Basel start, Nishikori would have only the Paris Masters from November 2 – last week of the regular season – to try and insure a place in the season wrap-up.

Nishikori will be replaced in the Swiss draw by Marcos Baghdatis, who last played the event a decade ago.