Posted by TennisNews.com on November 23, 2015 in Business News, Headline 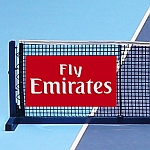 The ATP and Emirates announced a new partnership on Sunday that will see the award winning airline elevate its status to the Premier Partner of the ATP World Tour from 2016. The five-year agreement represents the biggest sponsorship deal in the history of the ATP.

As Official Airline and Premier Partner of the ATP World Tour, Emirates will benefit from global marketing rights delivering a powerful and consistent presence via the Tour’s iconic net branding at approximately 60 tournaments worldwide to reach a cumulative broadcast audience in excess of 800 million. The partnership also provides a platform across the tournaments to experience Emirates’ unrivalled hospitality and will see extensive activation through the Tour’s official website ATPWorldTour.com, the No.1 tennis portal in the world with over 325M visits a year.

An illustration of the Emirates net branding at next year’s Barclays ATP World Tour Finals.

“It says a lot about where we are as a sport that an industry leader in Emirates, such a highly regarded and well established player in the sports marketing world, has chosen to further increase its presence and association with the ATP World Tour,” said Chris Kermode, ATP Executive Chairman & President. “The partnership provides a long term commitment and a true vote of confidence for the future health of our sport. We look forward to continuing and developing the successful partnership we have built over the years.”

“Emirates is pleased to enhance its partnership with the ATP World Tour,” said Boutros Boutros, Emirates Divisional Senior Vice President Corporate Communications, Marketing and Brand. “For Emirates, the global reach offered by sponsoring the ATP World Tour affords us the opportunity to connect and engage with millions of tennis fans around the globe. Emirates offers direct flights to nearly 90 percent of the 32 countries visited by the ATP World Tour making this partnership particularly relevant for our customers. Tennis truly is an international sport and it is our own appreciation of this sport that has been the catalyst behind our growing tennis sponsorship portfolio.’

In 2016, the ATP World Tour will unfold across 62 tournaments in 31 countries in six continents. With 4.3 million fans attending on-site and more than 880 million dedicated TV viewers across the season, the Tour has attracted record audiences in recent years. The 2015 ATP World Tour season, culminating today at the Barclays ATP World Tour Finals at The O2 in London, is set to hit an all-time annual attendance record.

Emirates has been a Platinum partner of the ATP World Tour since 2013, as well as title sponsor of the Emirates ATP Rankings. Today’s announcement sees Emirates replace Corona as the Tour’s Premier Partner following the expiration of the agreement with the Mexican beer brand at the end of this year.