Djokovic Is Totally Ready For The London Finals

Posted by TennisNews.com on November 10, 2015 in Headline, Tournament News 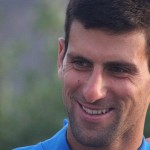 Novak Djokovic admitted he could not be bettered prepared to win the upcoming Barclays ATP World Tour Finals in London for a fourth time in succession and take the title for a fifth time in total.

By winning a third BNP Paribas Masters title in a row at Paris Bercy, the world no.1 extended his current winning run to 22 matches and established himself as the first player in the Open era to reach 14 consecutive finals in a calendar year.

Djokovic’s 6-3,6-4 win over Andy Murray puts him in an apparently unassailable position at the top of the Emirates ATP World Tour rankings and he reported no ailments, aside from a routine soreness to his shoulder before preparing to journey to begin his preparations in London.

“I will continue to do what I’m doing so far,” insisted the 28 year-old Serbian.  “There is no reason for me to decrease the pace of the training, preparations and performances.

“It’s the last tournament of the year, very big tournament where I have done very well in London in the past .I’m hoping that I can repeat the kind of performances and success I have had there in previous years.  I like the conditions there, the crowd is great with the attendances amazing.  It’s a great stage for the tennis and the O2 Arena has become a tennis cradle.”

To illustrate Djokovic’s dominance still further, the set he dropped against Stan Wawrinka in Saturday’s semi-final was the first he had lost since dropping the second set to Roger Federer in the US Open final two months ago.

“I try to take nothing for granted and attempt to work on my game all the time,” Djokovic continued. “I know that the only way I’m managing to stay successful, is to continue progressing.  I’m not trying to keep the status quo,

If Djokovic is content, the same could most certainly not be said for Murray. The Scot repeatedly thrust his head into his hands after another one hour and 32 minutes beating from his long time rival, a sixth defeat in seven meetings this year.

“Since the beginning of last year, my results against him [Djokovic] haven’t been good enough from my perspective,” said Murray. “Obviously it’s harder playing against the best player than someone that’s ranked 8 in the world and there is no disgrace in losing to him but I do feel like I need to start doing better.

“The score line in the last couple of matches hasn’t been good and I need to think about why that is and what I can do to things turn around.”