Posted by TennisNews.com on January 29, 2016 in Tennis News 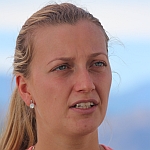 Petra Kvitova has stopped working with her coach, David Kotyza, the 25-year-old Czech has announced.

The two began together in 2008, when Kvitova had just broken into the top 50.

Kvitova wrote on Facebook that though she and Kotyza had “seven fantastic years together, I will no longer be working with David.”

During their partnership, Kvitova won two Grand Slam event titles and rose to No. 2. She said, “We had a great run together, two Wimbledon’s, 17 titles and enjoyed many laughs.

“I would like to thank David for the many things he taught me on and off the court.”

Despite some significant success, Kvitova has also been plagued by inconsistency. Her second-round exit at the Australian Open followed a season in which she skipped much of the second quarter, saying she lacked motivation, and was then diagnosed with mononucleosis as the second half of the season began.

She was quoted in a statement in Czech as saying her career needed a “fresh impetus, and a change.

Kvitova has not announced a new coach. She intends to play the first round of Fed Cup against Romania, and then turn her attention to filling the position.