Federer And Nadal Are Top Paid Sports Stars In India

Posted by TennisNews.com on March 9, 2016 in Business News, Headline 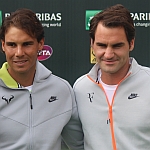 Roger Federer and Rafael Nadal have been the top earners in the International Tennis Premier League (IPTL) and received around $4 million each in 2014-2015, according to research company Super Insight.

It published an extensive look at sports earnings in India, finding that the two biggest names in tennis were the highest paid in the country, despite playing just a handful of matches in the league. Federer played in Delhi in the first season of the league when Nadal withdrew from the Indian team, and committed to appearances in three cities in the second season. Nadal did not play the first season, making appearances in a couple of cities during the second season.

The biggest match of the season of the league may have been when two took on each other in a meeting in Delhi.

However, there is a wide difference in what players are paid, with top ten player Richard Gasquet scheduled to receive $275,000 for appearing for the three-day ties in three cities, though he eventually did not play because of an injury.

The IPTL consists of teams from six Asian cities and is played during the offseason as an unofficial competition.