Roger Federer To Return To The Tour Next Week in Miami

Roger Federer To Return To The Tour Next Week in Miami
March 18, 2016
Notice: Undefined variable: page_title in /home/tennisne/public_html/wp-content/themes/dante-child/single.php on line 205

Posted by TennisNews.com on March 18, 2016 in Headline, Tournament News 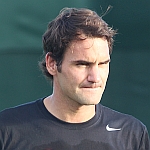 Roger Federer has announced he will return to action earlier than predicted next week after undergoing knee surgery following the Australian Open and will play next week’s Miami Open.

The 34 year-old world no.3 was planning on making his comeback at the Monte Carlo Rolex Masters beginning April 10 after originally setting a too optimistic return date for the currently ongoing BNP Paribas Open at Indian Wells.

Federer has won the Miami title twice previously, although the last of those victories came in 2006 when he beat his current coach Ivan Ljubicic in the final. He also won the title a year earlier with a final win over Rafael Nadal. But he did not play the IMG owned event last year and also opted to miss out in 2013.

Because of his age and experience, Federer is not bound by the rules of mandatory events, and it was anticipated he would repeat his 2015 schedule, thus skipping the visit to Crandon Park but he is clearly intent on getting back to action as soon as possible.

Apart from attending the Oscars ceremony in Hollywood, , Federer has been working hard on his recovery from the injury, reportedly a torn knee cartilage, sustained playing in a Melbourne park with his twin daughters. He has done his physical rehabilitation alongside his long-term fitness trainer Pierre Paganini. More recently he has been devoting a lot of court time with Severin Luthi and Ljubicic.

Federer used Twitter to announce the fact he would be playing Miami, alongside a series of emojis including oranges, dolphins, sunshine, palm trees and an optimistic thumbs up.