Posted by TennisNews.com on March 12, 2016 in Business News, Headline 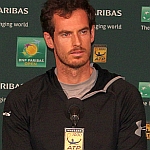 Andy Murray, a Head-sponsored player, spoke out for sensibility by saying the only logical conclusion to Head-sponsored Maria Sharapova’s doping admission is a long suspension.

Chris Evert insisted the reason so few fellow tennis players are stating support for the former world no.1 is that she avoids friendships on the tour.
“Maria Sharapova has always isolated herself from the rest of the tennis world,” maintained Evert, the winner of 18 Grand Slam event titles who still managed to maintain a lifelong friendship with her greatest rival Martina Navratilova.

Speaking to ESPN, Evert continued: “She’s made that known; she can’t be friends with the players. Her friendships are outside of the tennis world, she’s isolated herself. So it’s hard. “I’m not seeing a lot of support from a lot of the players.

“Whether its shock or whether they don’t want to become involved or have an opinion about it. It’s sort of surprising that not a lot of players have shown their support for her.”

Murray, a firm believer that drug cheats cannot be tolerated no matter what the sport, certainly did not buy into the fact that Sharapova was brave to speak out and should be treated compassionately when it comes to deciding on her sentence after testing positive for the use of the banned substance meldonium.

“If you’re taking performance-enhancing drugs and you fail a drugs test, you have to get suspended,” said Murray according to The Times of London.

And the Scot cannot comprehend that Sharapova ignored emails from the International Tennis Federation and the World Anti-Doping Agency, warning her of the consequences of taking meldonium, which became a banned substance on January 1.

Neither does Murray subscribe to the views of his racket manufacturer Head, who also sponsor Sharapova and have extended its sponsorship deal with the Russian despite her positive drugs test, insisting she made an ‘honest mistake’.

“I think it’s a strange stance given everything that’s happened the last few days,” maintained Murray who has a multi-million a year deal plus bonuses for major titles with the Swiss manufacturers. “I personally wouldn’t have responded like that.”