Indian Wells Is Aiming For A Status Above The Other Masters Events
March 17, 2016
Notice: Undefined variable: page_title in /home/tennisne/public_html/wp-content/themes/dante-child/single.php on line 205

Posted by TennisNews.com on March 17, 2016 in Business News, Headline, Uncategorized 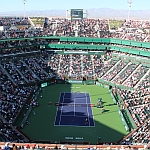 Along with the Shanghai Masters, Indian Wells tournament organizers have lobbied the ATP tour about creating a category of special Masters events with more points and prize money than the regular Masters.

BNP Paribas Open Tournament director Ray Moore told a Belgian newspaper, “We talked to the ATP about that too. We’re very interested in having a different category so we can have more points and more prize money for the players.”

Any change would take some years but the ATP is seen as receptive to the proposal.

The Shanghai Masters wants to become a two-week men ‘s event. It currently offers more than $7.6 million in prize money, more than any other Masters.

The Indian Wells tournament offers more than $7 million, the same as Miami, but Rome offers as little more than $5 million. With owner Larry Ellison planning major upgrades to the facilities and the secure financial position of the tournament, it is looking to officially increase its standing. Moore suggested that Indian Wells could increase to a 128 draw, the same as a Grand Slam.

“We could be a Grand Slam, we have the facilities and the space, and in terms of land we’re twice the size of Wimbledon, the French Open or the Australian Open. But we’re very happy where we are. We’re just always pushing to improve,” he said.

It is not known whether other tournaments have also expressed an interest in creating a higher level of tournament behind the Grand Slams.