Djokovic Is Not Surprised By Success

Djokovic Is Not Surprised By Success
February 23, 2016
Notice: Undefined variable: page_title in /home/tennisne/public_html/wp-content/themes/dante-child/single.php on line 205 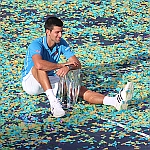 Success and growing confidence obviously go hand in hand and the self-belief of world no.1 Novak Djokovic could not apparently be any higher after last month’s sixth Australian Open triumph made in seven ATP World Tour titles in succession.

Djokovic is back on the circuit after taking a three-week break following Melbourne, to rest, revitalize his game and reacquaint himself with wife Jelena and infant son Stefan. Now he is back and ready to extend an amazing run of success, of which he said: “I have to be honest; it does not surprise me.

“Why? Because I expect a lot from myself.  I believe I can win every match I play, against anybody and on any surface.  The tournaments and results I have had over the last couple of years give me enough reason to be optimistic.  I don’t think there is anything wrong with that.”

Last year the Serb won three major titles, six Masters 1000 crowns and 11 titles in all, accruing more ranking points in the course of one calendar year than any other player. He is currently on course to do even better in 2016 and with his current mindset it’s hard to see him failing.

This week he is aiming for his fifth career title in Dubai. “Being at the peak of my career at the moment I am trying to use this momentum I have,” continued the 28 year-old who has been drawn to face the Spanish veteran Tommy Robredo in the first round.

“I am trying to take everything out of myself and achieve more. I know after winning 11 Grand Slam titles, people start talking about the all time greats and me getting closer to them. Having achieved so much I have to reflect on it and be satisfied but it’s not the final word, I still feel I have many years in front of me.”

Exactly how many, Djokovic has no idea but one of the closest friends on the tour is more than willing to speculate. As a fellow Serb, Viktor Troicki has witnessed the Djokovic career from close quarter and he said: “Five years, six years, seven? “Do you see anyone else coming? No, so maybe even longer, I don’t know.

“Nole does things different than the others. He takes it more serious ever since he was a kid. He is just very talented and also very professional, and that pays off. He has now reached the level where he feels everything is under control.

“I guess you will have to ask him how it feels to play at such a level, but for me looking from the side, it’s just amazing. It’s crazy what he does.”